In this article, I will try to explain how you can create private Ethereum blockchain testing node on your system using a Docker image. Before starting, I will try to give a small overview of the Docker.

Do you remember the age when we had to buy a sophisticated server for every single online application that we had to build? That era was costly because if you would invest your money to create an online application, then you have to think about the server as well, e.g. (Shared Hosting / Dedicated Server).  Then VMWare era came, and we reached to the point where one hardware server can support multiple online applications with their separate OS / RAM and storage. So all the OS images were sharing a single machine and it had drastically changed the hardware cost, and everything turned into a virtual.

But now this virtualization is considered expensive for the applications because the more we are moving into the future, the more numbers of applications are produced. So supporting multiple OS on a single server is doable but expensive concerning the memory, storage and cumbersome OS processes consumptions that sometimes make you forced to buy another hardware with another VMWARE and OS licenses.

Containers are the new technology which has decreased the cost and anomalies of the OS based Virtualization. The container came with the concept of having a stripped-down very lightweight version of the OS along with the product or application.

Virtual-box is the technology which is used by the Docker to create multiple containers. Due to this technique, I can run two different nodes within one host or machine or VM. I can release them to the production server without any hard configuration or environmental changes required in the host OS. So the production and testing server needs only Docker engine and rest of the thing will be taken care of by the product’s image and its runtime version “Container.”

Docker Inc. is a company who has built and provided Docker Engine and development Kit, which you can use for creating and composing Docker containers and images. For more detail check Docker’s documentation.

As you know, we are talking about decentralized technology where we have to run peer to peer nodes. The best way is by using Docker containers which will contain the Ethereum network environment and client. Also, you can scale these nodes on your computer without worrying about an extra server or Vmware images.

So lets build your first Blockchain private network on the Ethereum node:

Now we are ready to build our first blockchain private node.

Here you will see some files and folders.

Now we will build the single test Ethereum node

Let’s use this command

This command will pull the image from the Docker hub (Docker hub is like a central repository of Docker’s images). It will take few minutes to download relevant images within your system. If you are using Linux server of your Docker, then all the images will be stored under the Linux image. Otherwise, for windows server, all images will be saved under Hyper-V directory. C:\Users\Public\Documents\Hyper-V\

Since I am building on Windows home, so I do not have Hyper-V enabled directory, and my all images are saved under the Linux server of the Docker. You can also check what server and client versions you have for your existing Docker setups.

Write “docker version” command on the quick start shell of the Docker. 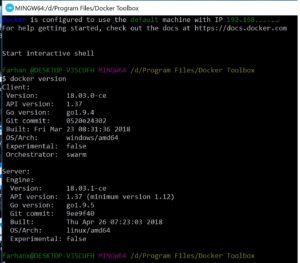 Here you can see the server is linux which is by default version when you install Docker on your windows.

By default our previous docker command will create three containers

The NetState container’s application will allow you to see the status of your private Ethereum node.

Congratulation you have built your private blockchain. This step is just a baby step towards Ethereum. In my next article, I will explain more in detail how to use better tools and other approaches to run Ethereum node. This article will give you some overview of the Docker and how Docker can utilize Ethereum nodes images to create containers. This understanding is essential since in future we will be working with several peers to peer nodes and to simulate this type of mesh network Docker is a savior for us.